The Ten Habits of Non-Conventional Thinkers

Conventional wisdom is like the monster under the bed for intelligence analysts. We’re all afraid of it but we can’t quite describe what it looks like. Some worry very much that they are actually guilty of it themselves. But we’d rather not talk about it.

1. Non-conventional thinkers are very suspicious of what anyone says they “know”.  They consider knowledge a pretty slippery character who is largely the creation of whatever sensemaking tools are popular at the moment. When we develop new tools, we develop new knowledge that often topples down all previous architectures of knowledge.

2. Non-conventional thinkers eschew tidy, neat thinking. They like messy ideas. They go looking for them. They are not taken in by common human crutches such as the desire for symmetry.

3. This is hard, but non-conventional thinkers try to avoid falling in love with their ideas. They are mean to them, even abusive. (or at least they should be!)

4. Non-conventional thinkers don’t censor themselves. They try to say out loud or write down everything they’re thinking. I think too many people don’t even offer up the good ideas inside their heads.

5. They talk to and listen to very diverse people. They enjoy reading about ideas that are way out there. Last night on Netflix I watched a fascinating biography of William Burroughs. My Netflix Horoscope right now says I enjoy watching cerebral biographical documentaries.

6. They don’t think much is sacred. Not even Albert Einstein. Albert Einstein was a brilliant man. It seems like he was also a kind person. But he famously hated the idea of an expanding universe. Because astronomers and physicists were so in awe of him, they tried to explain away for about 20 years data that pointed to a big bang.

7. Non-conventional thinkers love to attack disciplines and ideas that have been static for a long time. They like even better to attack truths.

8. They love to look at things from completely different angles. They want to see the very finest details. They actually prefer to know exactly how things work. Non-conventional thinkers take no perspectives for granted and expect to find an element of truth even in the most outlandish points of view. 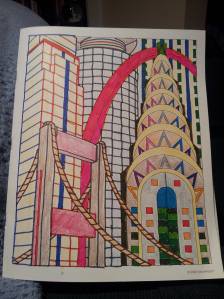 9. Non-conventional thinkers like to stimulate their thinking with sillinesses. They will engage in little rituals that fertilize their brains. Today I colored.