Just Another Tale of Lost Luggage

Some of you who follow me on Twitter (@milouness) are aware of the recent adventures of two bags belonging to me and my mom. Actually the bags didn’t do that much adventuring, come to think of it. We were doing all the traveling, supposedly chasing our bags across four European cities while they remained snugly indifferent in London. This little adventure reminded me of some of the most interesting traits of the English and the Germans, well really of humans in general.

1. The British are obsessively honest about their shortcomings. Wait till you get to Munich. The Germans are much better at this than we are. Said to me by a competent and honest British Airways gate agent for the BA flite to Manchester who tried to reassure us that our bags would eventually join us. Now our final destination was supposed to be Vienna so you may ask why we were going to Manchester, UK. To connect to a Lufthansa flight to Munich because that was the closest we were going to get to Vienna that day.

The trouble began when our American Airlines flight to Heathrow was about an hour late, due to thunderstorms at JFK. Apparently about half of the missed connections were to Vienna, making it impossible, on a busy travel Saturday, for most passengers to be rebooked on already packed flights.

My mom and I were the fortunate ones, or so we thought. We had lucked into the rare London to Manchester to Munich routing. I figured Munich was close enough to where we wanted to go so I cancelled one hotel and changed my car reservation. Everything was good to go but the bags. 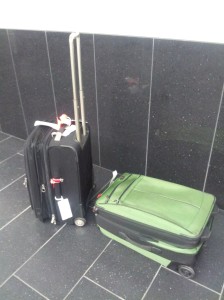 2. People are too trusting of technology; suitcases only know to go where they are tagged. Throughout our amazing race day we were assured multiple times that our luggage was now tagged to follow us on the London-Manchester-Munich routing. We asked every human we could in London if our luggage was coming with us and they assured us it was. See, we scanned your luggage receipts into the system so your luggage is now linked with your new itinerary. It’s all set. I admit I was more trusting than my mother who warned: “Luggage doesn’t know anything about the computer. It only knows where it was tagged.”

3. People and technology can conspire to tell outright lies. Once in Manchester and with our luggage nowhere in sight, we went to chat with a competent Lufthansa agent. Right in front of us she called some Global Baggage Handling Command Center (that’s what it sounded like to me). No sooner had she mentioned the “Medina case” than the person on the other end seemed to recognize its complexities immediately. Your bags are being sent rush to Munich right now. They will probably be in Munich before you get there.

Given what actually happened, I am left to speculate that

a. She was actually putting on a show for our benefit, there was no person on the other line, and the Global Baggage Handling Command Center is a myth; or

b. The Global Baggage Handling Command Center was lying to her and they never did any of what they said they did; or

c. (and most likely) “Luggage doesn’t know anything about the computer. It only knows where it was tagged.”

4. The Germans know they are more competent than all the other Europeans (combined?) and are quietly cocky about it. Needless to say no bags showed up in Munich. (Eventually we drove to Vienna the next day to pick up the bags, who sure enough had always intended to go exactly to where they had been tagged.) So we approached the Lufthansa service agent, a magnificent woman of a certain age who anchored the lost luggage desk like an Athena.

As soon as she saw me clutching my wreath of tickets and boarding passes, she observed: I can tell already you have had a horrible day. Just start from the beginning and tell me everything that happened.

She allowed herself only the briefest moment of schadenfreude when I shared the British Airways personnel stated belief that Lufthansa would be able to fix the matter because of their superior skills. She telexed British who told her the bags would be arriving in Vienna the next morning on the same flight we had been booked on the day before. And so they did.

Now that I’m done with the luggage story, a few other observations.

5. The occurrence of Graffiti is a reliable indicator of political mood. The first thing I look for when I’m in a new city is the frequency and nature of graffiti. In Europe, for the last ten years or so, graffiti has been the worse in Spain, by far. No highway structures go untouched and graffiti often mars sides of buildings in quite nice neighborhoods. Germany, at least the part that was once Western, is largely graffiti-free. But as soon as you enter the former East Germany, you see it everywhere.

6. Berlin remains a construction Hot Spot. No matter which way you look on the horizon, you see cranes, never alone, at least pairs, triplets, even quintuplets. The beautiful Unter den Linden, which our hotel overlooks, is torn up for the installation of a new U-bahn stop.

7. Americans as a culture combine British cheekiness and German efficiency. These two heritages account for the largest percentage of the US population, by far. We have always been able to turn seeming contradictions into our national advantage.

And so here I am sitting at the San Antonio airport yet again and I’ve observed a new variant. (Check the comments to the previous post for #17!!)

I travel a lot, which means I spend a lot of time at airports, waiting and watching people. (Walking too, of course, carrying bags, which is why I think airport travel is the closest us modern humans get to what must have been the life of our early ancestors: walking long distances carrying heavy loads.) But I digress.

As I watch people I’ve noticed many distinctive “waiting styles” at airports. Some are golden oldies, having been with us since the earliest days of air travel–although I’m certain many more people then just looked scared to death as air travel really was much more dangerous in the 1930s and 1940s. Other waiting styles emerged after September 11.  Here is my list of observed waiting styles,  captured by what I imagine the different individuals are thinking as they wait. Please do let me know if there are others you have observed.

2. I fly so often I’ve grown winglets on the ends of my arms.

3. You look very, very suspicious to me.

4. I have many pieces of paper that I need to organize RIGHT NOW!

5. No one, and I mean NOBODY, is going to beat me to the head of the priority access line.

6. Because I am a hugely significant business person and a Road Warrior, my two carry-on bags are HUMONGOUS, and I dare any flight attendant or gate agent to make an issue of it.

7. I must rearrange everything in my bags before I board, Here, this spot on the floor is perfect, right in the middle of where the road warriors are jousting for the pole position in the priority access line.

8. I am a young mother with 2 kids under 5 and one on the way and I’m not really sure why I married the jerk who thought it would be FUN if the whole family joined him for two days in Orlando at the end of his business trip (and he mentioned it to the kids first before I could do anything about it.)

9. I am starving. (That hike across the great Savannah lugging my TUMI bag just took the starch out of me!) I have bought 3 bags of food. I thought I could wait until we boarded but now I have to eat everything in the next 5 minutes. I hope nobody needs to sit on the chair I’m using as a table.

10. I have 23 phone calls I must make before we take off and I frankly don’t care if you can piece together my entire life story by listening to me. Just don’t tell anyone about the lies.

11. I really don’t understand this boarding by group process. Let me just stand in front of the gate so I block everyone else’s access.

12. I am a Premium Star Platinum Alliance 1 billion K person. What do you MEAN you DON’T HAVE a First-Class upgrade for me?

13. I haven’t enjoyed flying since they banned liquids and I can no longer bring my own vodka.

15. I cannot stand still. Let me pace again through the clump of people at the gate so I can run over their feet with my rolling suitcase.

16. Why is this person with no visible electronic devices (except the hearing aid) (and reading a hardcover book no less) blocking access to the only electric outlet??? I could kill him!! Wait!  I don’t think anyone would notice if I used my charging cord to strangle him…