I was born in Puerto Rico and I try to go back every year for at least a week. This is one of those weeks. If you haven’t been there, it is a diverse and beautiful island with some of the best examples of karst topography in the United States and hundreds of miles of diverse coastline, from pure white beaches to dramatic bluffs. Most people who just visit San Juan never get to experience this diversity and may get little appreciation for the Puerto Rican people and culture.

Speaking about Puerto Rican people and culture reminds me of how I  learned that “being Puerto Rican” had (has?) a certain malodor, at least in some major cities of the East Coast. I came to live as an adult in DC as a transfer college student. Previously I had been in Texas for 8 years, which is why I consider myself a Puerto Rican by birth and a Texan by nationality. And I had no real concept of what being Puerto Rican meant on the East Coast. (To this day when I meet someone new, the chances are 50-50 that, when they find out I’m Puerto Rican, they will just assume I grew up in NYC. Conversely, I take great and flinching pains to rescue them from that idea, which reveals my prejudice as well.) Anyway when I got to Catholic University, I started working in the dining hall and I just innocently told my coworkers I was Puerto Rican. And this fellow student from Connecticut advises me: “If I were you I wouldn’t tell too many people that cuz where I come from Puerto Ricans are lazy and dirty.” (To this day I have had a prejudice against any Connecticut, including always rooting against their excellent basketball teams. But it can’t be helped.)

Once you get away from San Juan it becomes clear how different the island is from the States. If Puerto Rico ever became a state, it would be, by a 50% factor, the poorest state in the union. The economy as currently structured does not generate enough jobs for the young men and women who live there. So everywhere you go you see large clumps of young people, mostly men, mostly doing nothing. Another indicator of the absence of youth engagement are the large pied-piper party trucks and vans that bounce along the roads, topped by about 6-foot speakers, blaring out rhythms enticing all to join them at the best place to party that night and this weekend. My mom observing all this said, “We Puerto Ricans are lazy.” I said, “I don’t think so. But there is certainly a messed up rewards structure here.” When there is nothing to work for, we humans, being reasoning animals, often choose not to work. Sensible.

In terms of manmade structures, most of the island is just a mess. For example, there appeared to have been no zoning laws for much of recent history, leading to just the ugliest stretches of suburban blight I’ve ever seen. And, and this is my opinion, the Fast Food industry appears to have been allowed to run roughshod over the local food culture (which truth be told wasn’t too healthy either, but at least there was less of it usually served).  What I find really appalling are the huge billboards all over the state, tempting you to “take a break” by eating about 2000 calories of carbohydrates and fat. Diabetes is, of course, an epidemic.

So as I drove around the state, visiting relatives (and I thought it would be impossible to drive 400 miles in one day in PR but I am here to attest it can be done) I realized the entire state is a very good example of a very poorly designed network. The risk/rewards structure facilitates nonproductive behavior. Lack of design thinking at the very beginning leads to consequences one could have foretold. (Is there a design checklist out there? There must be. That actually reminds me of another lesson, #20, as a CIA manager. The importance of checklists. Most serious professionals I’ve known are offended by the concept of checklists–we’re above that, they say. As a seriously flawed human being, however, who claims to very little expertise, I love checklists. But I digress….)

The road “system” is the most obvious if not the best example of bad networks. Intersections between major highways are particularly clumsy, leading to creative workarounds by drivers. I wish I had a picture to show you, but of course I’m always driving at the time. But the lesson is clear: people will adjust themselves to even the most badly designed network. But making the most of bad situations allows for survival, but not prosperity.

My relatives in Puerto Rico are real characters. A real highlight is Juana, my mother’s cousin, I think, although determining exact family connections is a challenge given the alarming rate at which people recouple, at least in my family, and produce half-brothers and half-sisters. Anyway here’s Juana telling us one her many wonderful stories. I particularly liked the one where she went to visit the grave of her beloved husband (I was going to write deceased husband, but thought better of it given that’s why he’s in the grave in the first place). Anyway, she’s at the gravesite when a sudden burst of wind manifests, blows her down–that wind was substantial!!–and deposits her exactly alongside the burial site of her departed Gabriel, precisely where she will lie when she eventually joins him. 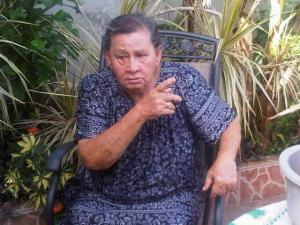 And here are some of her beautiful orchids. 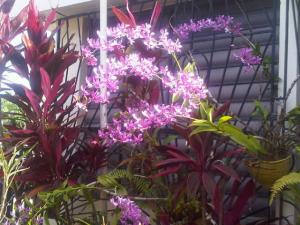